Last night a person who I considered a good mate, asked me where I am from while we were walking out of gym together and when I said Iran he turned dead silent, turned his back on me and walked off without saying one more word. This triggered me to tweet:

I am an Iranian, was born and grown in Iran & I just updated my profile to indicate this. If you don’t like it then unfollow me #racism

My name is Mehdi Khalili. I am a programmer. I live with my wife, Shadi, and my 2 year old son, Benjamin, in New York. 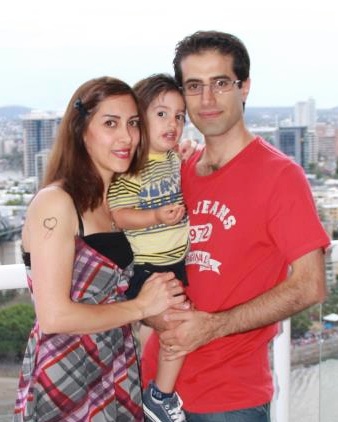 I was born in Tehran, the capital city of Iran, and grew up in a family of five. My family still lives in Iran… and guess what? We are not terrorists!

I am a senior consultant working for ThoughtWorks out of the New York office. My mother is a housewife, the most awesome and kindest mom one could wish for, and my dad, just as caring and loving, is one of the most senior NDT engineers in Iran and has been titled ‘The Best Engineer’ in IranAir many times. I have a brother, 5 years older than me. He is an entrepreneur and a self made millionaire with a successful business in distributing computer and networking equipments. I also have a sister, 5 years younger than me. She works as a senior building architect in a highly regarded architecture consultation company in Iran.

God knows I am not writing this to brag about myself or my family and I do NOT consider myself better than you. If anything I am writing this because at times I feel disadvantaged. Many times when someone asks me where I am from and I say Iran, I see a huge change of attitude. Sometimes people just instantly stop talking with me. For some others, I can read their face while they’re thinking “Holy crap! An Iranian. Am I safe with him?”. These people normally ignore me the next time when I say hi or avoid me altogether! There is another group, the group I love the most, who don’t mind it perhaps because they know Iran and Iranians not through Hollywood movies and TV series and news but through research or interaction with Iranians or even better perhaps they’re just not the type that judge people by their country of origin.

I am an Iranian, a husband, a dad, a programmer, a guy who tries to be nice to others and generally be a good citizen. I try to live a good life like you and I am giving it my best shot. Now if you think you are better than me and I am not good enough for your companionship because of where you were born, or your skin and eye color, or because you are richer than me or can speak a certain language better, or because your race is smarter than mine, then good for you. I don’t judge you for this - perhaps I would behave the same way if I was in your shoes; but I really hope one day you will learn to be nicer to people around you for your and their sake.

Hey and before you jump any conclusion, I am not generalizing anything here: racism is found everywhere! Iranians, as people who get discriminated against a lot, are unfortunately no exception: I have seen a lot of instances of poor attitude from Iranians towards other races and I am ashamed of it and I genuinely apologize if you have been discriminated against or mistreated by me or another Iranian.

This post is not just about me or Iranians though - people from different races, skin colors, backgrounds and religions are discriminated against and I think it’s about the time we thought more clearly and acted more maturely, without prejudice towards our neighbors, colleagues, classmates, or the guy sitting next to us in the train. So the next time you see a Russian, Chinese, Indian, African, Polish, Arab, French, Japanese, Thai, Australian, Pakistani, German, American or from any other race, be nice to them, throw away the stereotype and show them some respect and treat them the way you treat your own race. One thing is for sure: regardless of who or how successful you are, you will be much better off when you give some love to people around you.

I didn’t mean to offend anyone with this post and I am sorry if you were offended. Also I am not a political person and this is not about politics. This is just my personal take on discrimination.

I love you my friend no matter where you were born.