[Update]: bddify framework has gone through a lot of changes and some of the topics discussed in this article have become much simpler or perhaps obsolete. You may find an extensive tutorial about bddify here.

bddify is a small yet powerful and extensible BDD framework for .Net developers:

bddify core barely has any logic in it. It delegates all its responsibilities to its extensions. Extending bddify is very easy and I will explain it in details in a future post.

How to install and use the framework?

After this your project should have three new files, apart from Class1 which is created by default: packages.config, bddify.cs and RunMe.cs:

Now you can run the tests (either using R# test runner or TD.Net or MSTest runner or any other runner you are using - should not make a difference).

Below is a few samples of what the result of running the test using R# looks like. For successful scenario with args the result looks like:

… and for failing step with args it looks like:

If you run your tests with TD.Net you will see something like below in your output window: 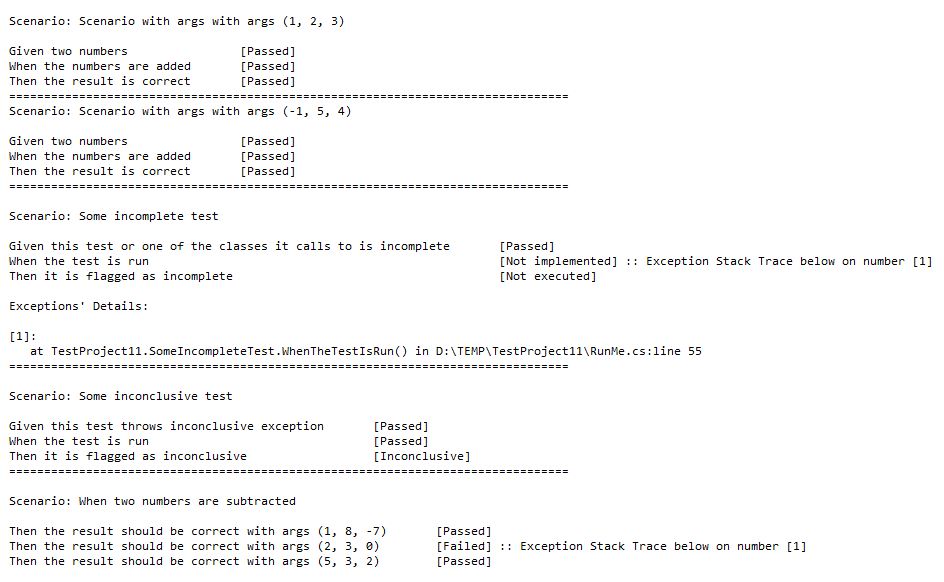 These are provided by ConsoleReporter class. bddify also has an HtmlReporter that generates an html report for every run. The result can be found under your project’s output directory in a file called bddify.html and it looks like: 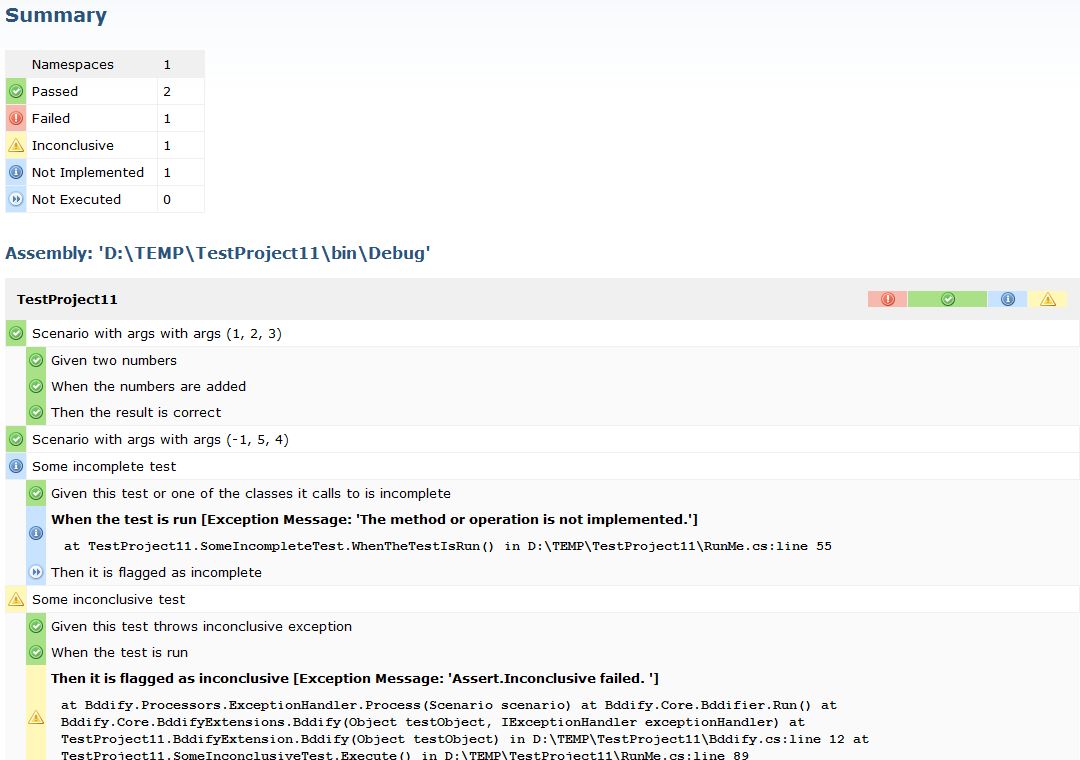 [Credit: Html Report would not look anywhere as nice without the help I received from Paul Stovell, Aaron Powell and other great colleagues at Readify. Thanks guys.]

The report shows a summary on the top and the list of scenarios underneath. Scenarios are grouped by namespaces they belong to. On the right of each namespace you can see a summary of the scenarios run as part of it.

If you click on a scenario you can see its steps and the result of each one including exceptions if there was any.

The RunMe file as mentioned above contains a few samples; but if you want to see more samples you may download the code and have a look at demos in the solution.

Just like bddify extension method that works on object instances there is an extension method for assemblies. The assembly runner can scan an assembly and run all its tests. The following code snippet shows a console application that bddifies all the classes whose name starts with ‘When’:

The framework does not know what classes you have in your assembly and which one it should run. So you have to pass it a predicate using which it can filter out non-test classes or test classes you do not want to run with assembly runner (e.g. slow tests).

The assembly runner provides a report on the console for you (plus the html report of course). The console report looks like:

This could be useful when you want to run your tests from command prompt.

Testing without a testing framework

bddify does not depend on any testing framework. For example you can bddify a class that looks like:

You could make the asserting methods public and use a testing framework if you wish. It does not make any difference for bddify.

It is worth noting that these sort of tests need a host to run; i.e. R# or other test runners will not be able to run these tests. This is where the assembly runner could help. There is a sample application, called AssemblyRunner, for this in the source code solution.

bddify is still very young and has a long way to go: there are still quite a few things I would like to add to the framework and hopefully it will be very easy to extend. I have provided a rather decent test coverage for the framework but I guess there will be a few bugs here and there.

I am interested in your feedback. Let me know what you think about the framework, where it is lagging and what it would take for you to use it in your project. If you find a bug or if you have a suggestion or issue with the project please raise it in the project home at Google Code.