[Update - 2012-04-25] I covered these features in my presentation at DDD Brisbane. You may find the slides, the video and more details here

Fiddler is a very popular tool for web debugging. It has been out for a few years now and it has millions of users. In this article I will cover some of the basic features of Fiddler and in a future article I will build on this foundation and talk about more advanced features.

It is worth mentioning that everything I am writing here (plus a lot of things I cannot fit into this blog) can be found on the Fiddler website.

Fiddler is a Web Debugging Proxy which logs all HTTP(S) traffic between your computer and the Internet. Fiddler allows you to inspect traffic, set breakpoints, and “fiddle” with incoming or outgoing data. Fiddler includes a powerful event-based scripting subsystem, and can be extended using any .NET language.

Fiddler is freeware and can debug traffic from virtually any application that supports a proxy, including Internet Explorer, Google Chrome, Apple Safari, Mozilla Firefox, Opera, and thousands more. You can also debug traffic from popular devices like Windows Phone, iPod/iPad, and others.

How does it work?

Fiddler sits between your http client and http server listening on a port for http(s) traffic.

I am sure you are familiar with ‘LAN Settings’ under the ‘Connections’ tab of Internet (Explorer) Options: 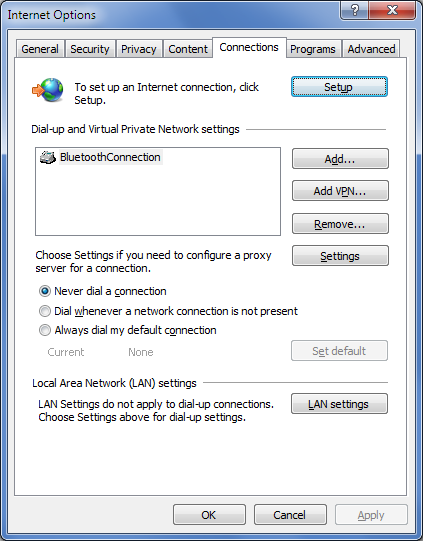 The Proxy Settings under ‘LAN Settings’ is your computer’s proxy settings which is kind of like the UI for WinINet. 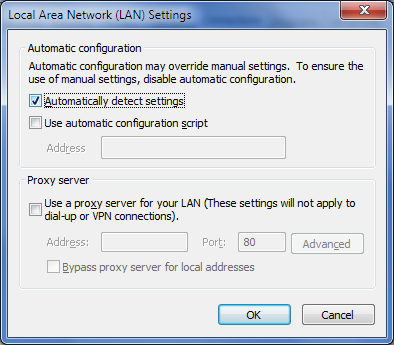 When you start up Fiddler it saves your current proxy settings and changes it so it can work as a proxy for all your http traffic: 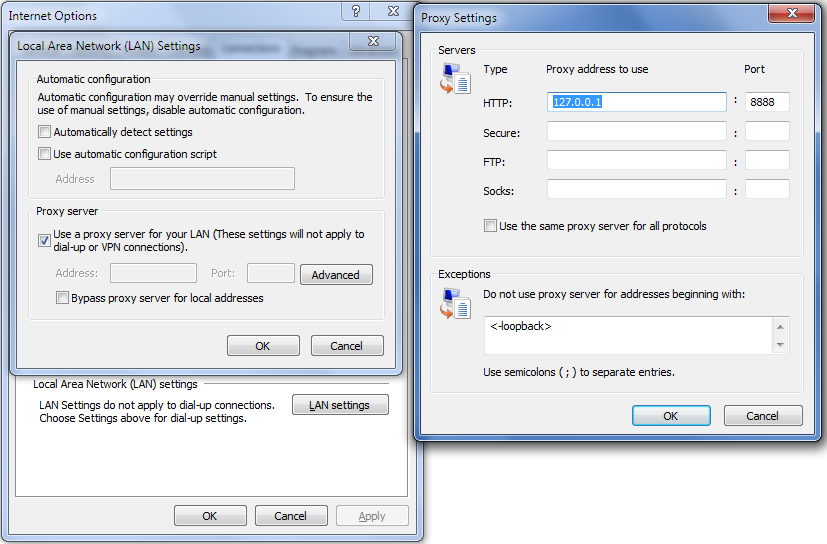 And of course it sets back the proxy to your original settings when you close the Fiddler or stop it. You can start and stop Fiddler capturing through File -> Capture Traffic, or using F12, or using start and stop QuickExec commands.

Fiddler is a Web Proxy; so it does not really care where the traffic is coming from and where it is going to. This means that you can use Fiddler on pretty much any application or device that can talk to a proxy: 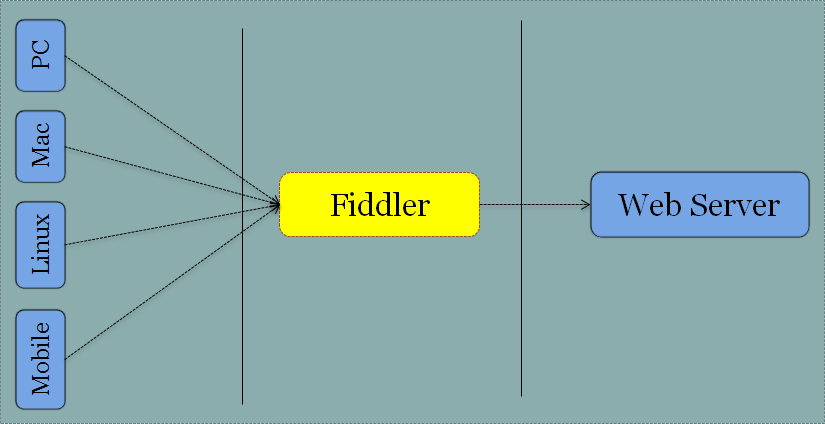 Fiddler is not the only tool that works as a proxy or provides these capabilities. Following is the list of some of the more or less similar tools:

WireShark and NetMon are proxies which are more or less similar to Fiddler in nature; however, while Fiddler intercepts the traffic on the Application Layer, WireShark and NetMon intercept the traffic on much lower level and they are not limited to HTTP. This makes them awesome choices when it comes to low level debugging of network issues or monitoring protocols other than http; however, they do not display the traffic in an as easily understandable form as Fiddler.

Browser plugins are, however, different from proxies in nature. Firstly they run in the browser and as such can only intercept browser traffic. All the browser plugins I know limit the traffic monitoring to the session/tab they are running on (which makes sense). Proxies however run as a separate process and intercept traffic regardless of where it is coming from.

The other difference worth pointing out is that browsers serve (valid/current) cached contents locally without hitting the network. For example if your website requires a CSS file that has been cached on the computer from a previous session and is still valid, when you browse to the website again, the browser is going to serve the css locally. This means that the browser plugin is going to see the content served from the cache while proxies will not see the request and the traffic because browser does not make any request.

Let’s get started with Fiddler 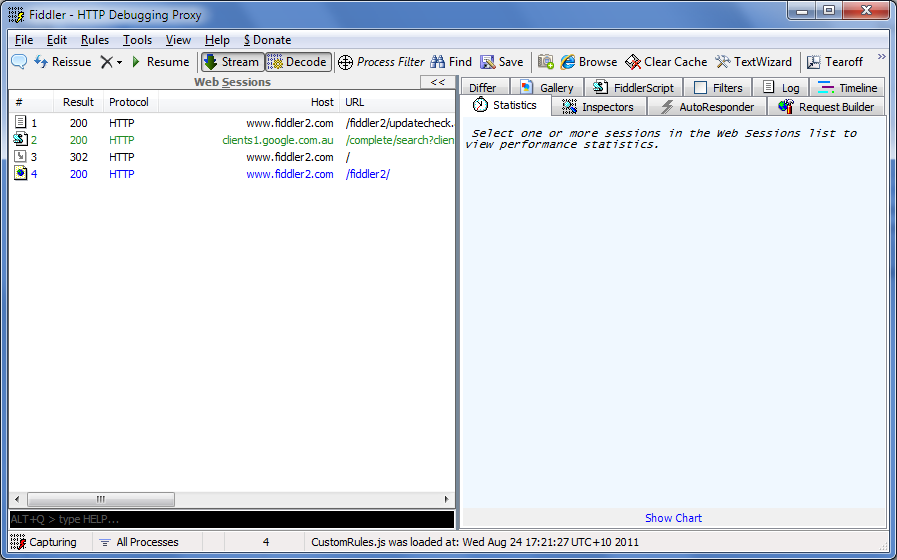 We are going to go through the UI and see what each tab/menu/feature does. Well, I do this for the most used/useful features and this by no means is an exhaustive reference. For more information please refer to Fiddler web site where Eric provides a lot of information on every single feature.

Web Sessions pane is where the traffic is displayed as it is captured:

The icons on the left hand side next to the ID give you more visual information about the session:

Figure 8 - Icons in the Web Sessions 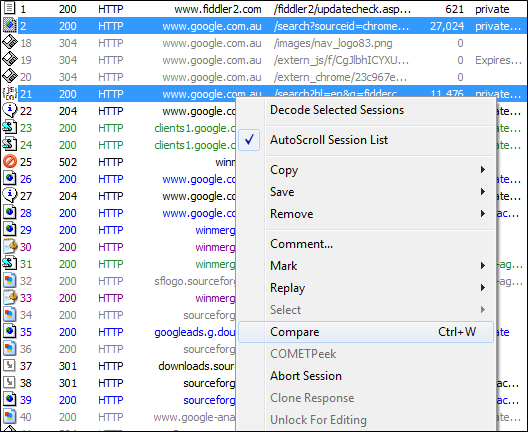 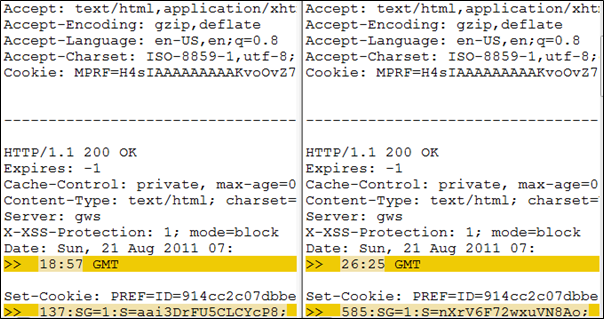 By default Fiddler uses WinDiff as diff tool; but you can change this in registry:

The first tab on the right pane is Statistics which shows you some info about the selected session. It is most useful when used on several sessions: 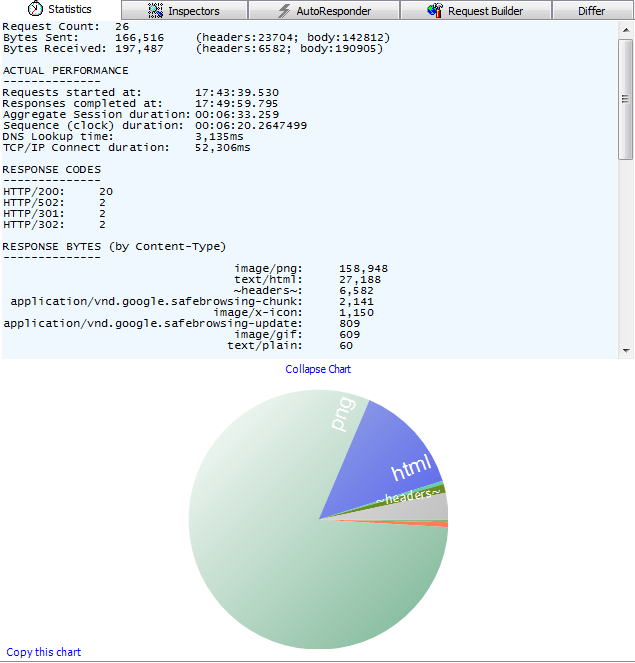 Is not that awesome?! So it is telling me that I have selected 26 requests, where total bytes sent and received are 166K and 197K (with more info about the header and body size), it provides a summary on received status codes and MIME types. And then there is the nice chart on the bottom.

Inspectors allow you to visualize requests and responses in meaningful ways. There are heaps of out of the box inspectors and you can write your own if you need to.

The little boy is my son and that subtle smile on his face tells me he is about to do something naughty - perhaps giving a visit to the China cupboard!

There are many inspectors and I could write a 30 page article about it; but it is much easier to understand if you run Fiddler and start double clicking on sessions.

Fiddler can decipher HTTPS traffic. This scares some of the guys at security/I.T. department; but this is nothing to worry about. It can only do so for the traffic going through it and by your permission.

By default Fiddler does not decipher HTTPS traffic and you should explicitly ask it to do so. In order to activate HTTPS traffic decryption: 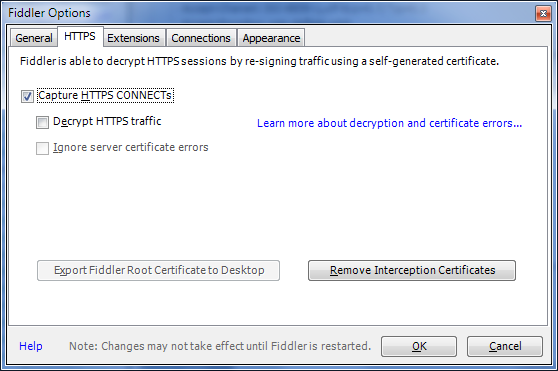 After ticking the second checkbox you get an alarming pop up message:

Clicking yes on that dialog brings up a second warning, this time by Windows. 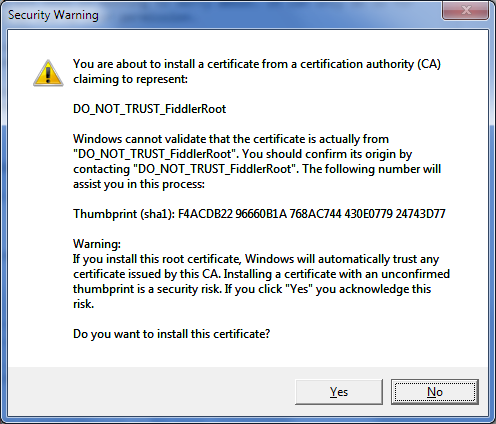 Clicking yes on this box installs Fiddler’s certificate in your Personal store: 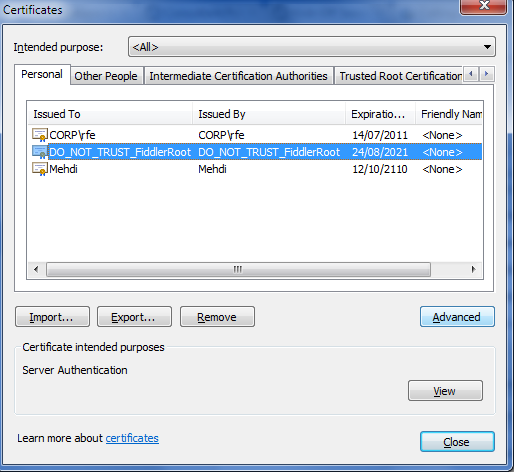 Figure 17 - Man In The Middle Attack

So while the client and server are unaware of MITM, the whole traffic has been monitored and perhaps modified. Fiddler does pretty much the same thing except that you know it is sitting in the middle.

In this article we saw some of the basic features of Fiddler. In summary this is what we covered:

Soon to come is the next post about more advanced features of Fiddler. Stay tuned.