In the last post I talked about BDD as a way to improve our testing experience and to write more maintainable and higher quality tests. We also talked about two approaches to write BDD style tests/behaviors. I think the outcome was very nice; but can we improve it?

I am going to use the credit card and ATM example from the BDD Simply post. I am using SpecFlow for this article; but there are other choices, like NBehave and StorEvil, that allow you to do more or less the same.

This is the text from my feature file:

If you run the test now it will be ignored because step definitions have not been implemented yet. 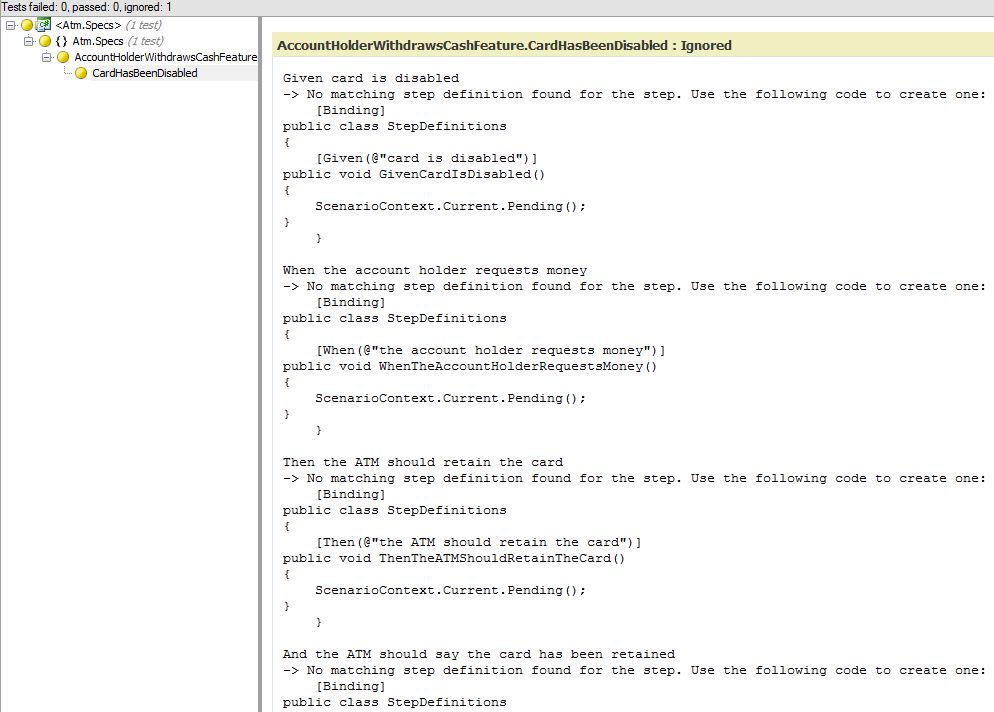 This is very sweet because when an existing feature with implemented tests changes (AKA when requirements change), those tests break and go red; but when a new feature is added its tests are flagged as inconclusive which does not break your build (test). In other words, your tests turn red for broken logic and yellow for yet to be implemented features.

On the right pane you can see that the framework has output some stub that you can use to implement required test steps. Copy and paste the provided stubs into a new file. Do not put this into the auto generated file; because it gets overwritten.

I created a file called ‘CardHasBeenDisabled.cs’ and implemented the steps as below:

I am using the same Atm and Card classes from the BDD Simply post.

It is nice but it costs

Using SpecFor or StoryQ was very easy and straightforward. It did take a bit of mindset adjustment to write tests the BDD way which IMO is very easy to adopt and quite worth it.

Who knows? You may even get lucky and get feature files from your BA for software requirements instead of 100 pages of word document with executive summary, big flowcharts and wordy and ambiguous requirements. That is pretty nice actually - instead of reading a boring long word document you get several feature files that you can execute and code against. You will have completed the feature/functionality when your tests (which BTW just turned into a regression suite) turn green.

When the requirement changes your tests break. Also the executable specification can be parameterized which provides a very nice framework for BAs to verify some of their guesses about the system and document it in an executable way. To learn more about this you may have a look at Gherkin which is the language of SpecFlow and a lot of other BDD frameworks.

YAGNI is another benefit. You write code to pass an executable requirements which means you are only coding what you need. You can of course go crazy and make a mess no matter what; but having a strict BDD practice in place guides you very well and keeps you on track avoiding some of the common YAGNI traps.

By separating specification and test implementation you may gain a few substantial benefits. I am in no way saying that you should always do this, or that these benefits always outweigh the cost.

These benefits are very nice and attractive; but you should make sure that they apply to your project/team. For example, if all team members are developers then I think StoryQ or even SpecFor would do just fine and removes some unnecessary maintenance load.

As usual consider this as an option, do a cost/value analysis of this vs. simpler approaches and choose the one that suits you better.