[Update - 2013-08-10] BDDfy is now part of TestStack organization. So this article has been ported to and is superseded by this post on the documentation website.

This is the fifth article in the ‘BDDfy In Action’ series. It is recommended to read this series in the presented order because I use some of the references provided in the previous articles.

BDDfy can scan your tests in one of two ways: using Reflective API and Fluent API. Reflective API uses some hints to scan your classes. These hints are provided through Method Name Conventions and/or [ExecutableAttribute][4] which we have discussed before. For this post we will concentrate on Fluent API.

I just thought I would share a bit of history with you first. I had just released BDDfy V0.5 and the API had kinda settled. So I thought I’d write an introductory article on CodeProject to promote the framework. On the top of article I said ‘BDDfy is very extensible. In fact, BDDfy core barely has any logic in it. It delegates all its responsibilities to its extensions’. Then I thought that just claiming a framework is extensible does not mean anything if I cannot provide a sample for it. That is why I wrote the Fluent API as I was writing that article to prove it to myself that BDDfy is highly extensible and also to provide an example of that. Well, I started it as an extensibility example; but then I liked and felt the need for it and baked into the framework. Today it is no longer a sample and in fact it is even more popular than Reflective mode!!

Fluent API of BDDfy does not really require much explanation as it is quite fluent ;-) So instead of trying to explain to you how it works I will just provide an example.

In the Method Name Conventions post I wrote a scenario called ‘BDDfyRocks’ which I repeat here for your convenience:

And then we expanded that scenario to the second one shown below:

This class has two test methods each representing one of the scenarios. The reports generated by these tests are the same as those shown in the Method Name Conventions post. As seen below the only difference is the name of the assembly and the namespace (which are different on purpose): 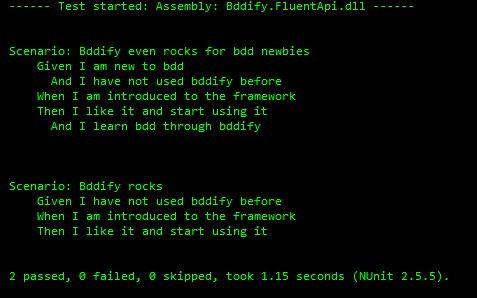 There are a few important differences in implementation as follows:

Out of the box, there is only one way to specify your Story and to associate it with scenarios and that is using StoryAttribute. This is the same for Reflective and Fluent modes.

Let’s add story to the above example:

As mentioned in a previous post, to create a story you need to decorate a class with StoryAttribute. In the Fluent mode the story class is usually the same as the class that contains the scenarios because, unlike Reflective mode, a scenario does not necessarily map to a class and is usually implemented in a method.

This of course has its pros and cons. The nice thing about this approach is that you can see an entire story in one file/class; at the same time that could be considered a disadvantage because some stories are rather big and have quite a few scenarios which will result into a big class. Again you do not have to put all the scenarios of a story in one class: that is just one option.

Running the tests now will include the story title and narrative into console and html reports.

These are some of the FAQs I have received for Fluent API:

Should I have my methods in the right order?

In the Reflective mode there is a situation where you have to put your methods in the right order and that is when you have more than one ‘AndGiven’ or ‘AndWhen’ or ‘And’ in which you case the ‘and’ parts are executed in the order they appear in the class. In the Fluent API that does not matter. The methods are executed in the order specified using the Fluent API. So it does not matter in what order they appear in the class.

How I can reuse some of the testing logic?

As mentioned above with Fluent API it is very easy to reuse the test logic across all scenarios of the same story because usually they are all in the same class. If the logic is not in the same class, you can still use inheritance or composition to compose a scenario.

Can my step methods be static or should they be instance methods?

BDDfy handles both cases. So feel free to use whatever makes sense.

In the last few posts I talked about Method Name Conventions and ExecutableAttribute. In this post we saw Fluent API - the last of built-in BDDfy scanners. These are the scanners that come out of the box with BDDfy.

BDDfy is quite customizable and extensible. You can very easily create your own dialect using Method Name Conventions and Executable Attributes and, as mentioned above, Fluent API was born out of an example and took only a few hours to implement (I have a few uncoming posts dedicated to customizing the framework.). So if you think the out of the box scanners do not behave the way you expect you may either customize them or very easily create your own. If you do so, I would appreciate if you could share your experience (and/or code) with me :o)