A quick tour around Ruby

Now that we have our environment setup, let’s take a very quick tour around Ruby language. Just before we get into coding, I want to quickly highlight a few somewhat interesting facts about Ruby. Quoting the [wikipedia article](http://en.wikipedia.org/wiki/Ruby_(programming_language) here:

Ruby was conceived on February 24, 1993 by Yukihiro Matsumoto who wished to create a new language that balanced functional programming with imperative programming. Matsumoto has said, "I wanted a scripting language that was more powerful than Perl, and more object-oriented than Python. That's why I decided to design my own language.". Matsumoto has also said that Ruby is designed for programmer productivity and fun, following the principles of good user interface design. He stresses that systems design needs to emphasize human, rather than computer, needs.

… and if you ask me he has done a tremendous job at delivering on this promise. We will see some mind blowing DSLs later in this series!

Some other quick facts:

With that out of our way, fire up irb in your terminal and run the below statements: 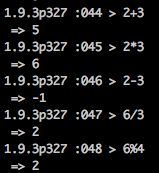 No surprises there. The simple mathematic in Ruby works just like C#. Ok, let’s take it a step further and do a simple assignment:

This should show you the same result as before (which is 5); but it does a bit more than that. Now if you type result in irb it shows you 5.

You can now use the result variable in your statements: try ‘result+2’ or ‘result%2’.

A quick tour around reflection

Two differences here: unlike C#, methods in Ruby are written in lower case (and the words in multi-word methods are separated using underscore) and to call a method in Ruby you don’t have to add parenthesis at the end of the method name but you can if you want to. There are also cases where you cannot drop parenthesis from a method call - we will discuss these in a future post.

‘Fixnum’ in Ruby is like ‘int’ in C#. Not that you ever have to care about this; but when a number doesn’t fit into an ‘integer/Fixnum’, in other words when it overflows, it gets upgraded to ‘Bignum’.

“So class method is nice but how can I see the list of methods on ‘Fixnum’?” I hear you say. In other words what’s the equivalent of ‘typeof(int).GetMethods()’?

As you may have noticed there are some overlaps on the methods. These methods can be called on the class and on an instance of it. The result is not necessarily the same though:

Hmmm, no instance_methods method for 2 (more on NoMethodError shortly)! It’s not that 2 doesn’t have any instance methods; but to get instance methods of an object instance you should (logically) call methods on it. To get a list of ‘class methods’ on 2 you can of course call 2.class.methods.

You may have noticed above that some of the methods end up with a question mark. These methods are yes/no questions you ask from the object or class and they return a boolean response. To see what I mean try 2.odd?, 2.even?, 2.integer?, 2.to_f.integer? and 2.between? 1, 3: 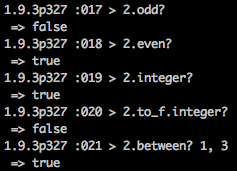 Just a quick note about NoMethodError that we saw above - this is an exception. Because Ruby is a dynamic language it doesn’t complain when you call a non-existing method (until runtime that is) and at runtime it gives you an exception if it cannot find the method or dispatch the call (this is VERY funky and powerful and I will need an entire post for it). If you want to see if some object has a particular method you can call respond_to? on it:

Ok, I don’t want to overload you. So I will stop here and will give you some exercises:

I hope you find this useful.

Please let me know what you think. Do you like this format? Do you want me to put more focus on similarities and differences? Anything you can think of that could improve this series?